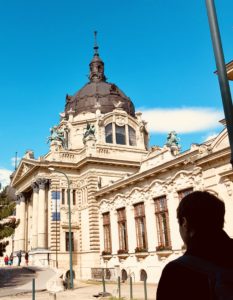 The past few days in Budapest have been filled with varying experiences since the majority of our time was spent visiting sites in small groups. Today, while some other groups spent their afternoon visiting the second largest Synagogue in the world, relaxing at local cafes, and visiting the the Botanical Gardens, my group decided to wake up early and take the city bus to the Hungarian Thermal Baths.

Adopted from Ancient Roman tradition, the thermal baths were created as social spaces for people of all classes to relax in the late afternoon. There are a series of pools with varying temperatures and people usually hop from one to another in a very set order. The water is drawn from the underground hot springs and are said to have minerals that can cure any and every illness. 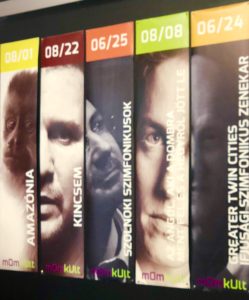 After the thermal baths, we headed for a restaurant near the Danube river for some lunch. We returned to the hotel and departed for the MOM Cultural Center for our rehearsal and final concert. The audience was excited and gave us a traditional rhythmic applause that we have had the pleasure of receiving at some of our other concerts as well. Because this was our last concert together, there was a lot of emotion, and it was great to see everyone shaking hands, hugging, and thanking each other for a great season. 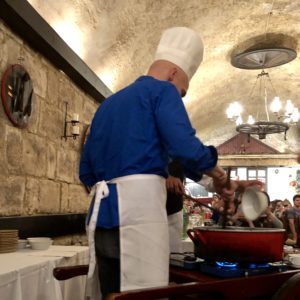 The farewell dinner was incredibly upbeat and amusing. Along with a three course meal which included goulash, pork and potatoes, and chocolate dipped crepes, the night was filled with activity. Traditional Hungarian dancing, an incredibly talented folk band, and funny interactive bits such as Maestro cooking us part of our dinner were included. Although our night ended very late, and a 3:00 am departure to the airport the next morning is scheduled, our time in Budapest was enlightening.

I have been in GTCYS for seven years, and this was my last concert with the program. This year, GTCYS is graduating a large sum of seniors. Many will be pursuing music as a full time degree, but for those who have chosen other outlets, I know all the graduates will find ways of incorporating music into their lives. I am excited for those playing in Symphony next year, and envious of the lucky ones who will get to travel on the following tour.